About thirty minutes into Chinatown, Jack Nicholson’s JJ Gittes questions Mrs. Mulwray about the death of her husband; specifically, her seemingly blasé attitude towards the event. As a detective pressing for answers, Gittes’ look fits him to a T— three-piece suit, top hat, and a cigarette perched between his fingers. Everything is in its right place, until he utters: “Look. I do matrimonial work. It’s my métier.” Métier? As Roger Ebert also wonders in his Great Movie essay for the film, what is this hard-boiled detective doing with a word like métier? Humphrey Bogart’s Phillip Marlowe wouldn’t be caught dead tossing around a word like that.

Continue reading on CFLXMOVIEOFTHEWEEK.COM
Posted by Gregory Roy at 9:31 PM No comments:

Useless Clatter...Orson Welles: The Man, The Myth, The Misunderstood 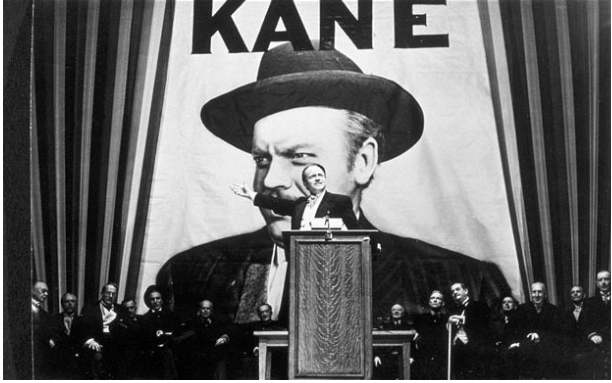 From a rising theater talent to America’s most outstanding auteur, Citizen Kane launched Welles’s career, forming the legacy that exceeds him to this day. Yet, that legacy is one of convoluted crossings. For many, Welles is considered one of the cinema’s finest directors. But to some others though, Welles’ legacy remains alive not though his great films, but through a series of fumbling commercial outtakes preserved on YouTube. In color and occurring decades after Kane, the minute and a half video stars an overweight and seemingly over-served Orson Welles pitifully trying to deliver lines for a wine commercial. The video has over one million hits, and there are two, in which case that number can be doubled. This total amounts to more than that of any trailer for any of his films, including Citizen Kane.

Posted by Gregory Roy at 9:39 PM No comments: As the Oscar date fast approaches, our Best Picture prediction is growing foggier by the day. Golden Globes and Guild Awards have been spread out amongst the contenders. With no single frontrunner, 2016’s Best Picture race is one of the closest in recent memory. A few weeks ago, Las Vegas released their odds for all of the nominees in the major Oscar categories. With the likes of Leo and Brie Larson dominating the awards season, it seems that most of the categories will offer few surprises. But the granddaddy of them all will be a photo finish.

Posted below are the potential winning odds for each of the eight Best Picture nominees, along with some thoughts as to why they could win and why they might not.

Spotlight 4 to 5
Why: If any film has a lead, no matter how small, Spotlight might claim it- at least according to Vegas. This delicately paced yet unnerving thriller has received nothing but praise since its release, picking up top prizes from the LA Film Critics and the Critics’ Choice. A –listers abound, Spotlight boasts an excellent ensemble cast and a wickedly tight-knit screenplay, two of the Academy’s favorite ingredients. Underdogs searching for truth against the immoralities of an institution...is this not the very reason we tell stories and go to movies?

Why Not: Said story deals with sexual abuse in the Catholic Church. Accolades aside, it’s hard to predict how the conservative Academy voters will react to such abhorrent material. Also, from a purely cinematic standpoint, Spotlight does not exactly dazzle. One critic cleverly compared the movie’s simple and muted style to that of Michael Keaton’s khakis. In the celebration of filmmaking, and with such a dynamic movie like The Revenant hot on its heels, can Spotlight’s substance trump The Revenant’s style? Depictions of the future serve as one of the most alluring aspects of science fiction. Even better is when these cinematic futures become the past. Audiences may relish in the opportunity to nitpick the accuracy of these fictitious creations in the aided benefit of hindsight. (Sorry Back to the Future II, there were no hoover boards yet in 2015. We were still trying to figure out the Segway.)


Unfortunately, 2001: A Space Odyssey does not lend many imaginative depictions of 21st century Earth. Despite a few bone-wielding apes on our prehistoric planet, Kubrick’s 2001: A Space Odyssey, as its title suggests, takes place mainly on board spaceships trekking through a limitless and (relatively) unchanging galaxy. But onboard any spaceship, technology is aplenty, often times in excess in sci-fi. Arguably the film’s most intriguing character is no man or ape, but a talking computer- the HAL 9000- stoic and physically lifeless. A novel idea in 1968, but almost 50 years later, HAL would simply join the likes of Siri, Watson and our unnamed Google Maps chauffeur on the ever increasing list of “talking computers.” Thankfully, our reliable trio have yet to cause the mayhem of HAL.
continue reading...

Posted by Gregory Roy at 3:27 PM No comments:

To read Franz Kafka one must imagine a world where logic and reason have no hold. To see such a place envisioned by one of cinema's greatest auteurs is a rare treat. Orson Welles’ 1962 adaptation of The Trial is by no means a conventional edge of your seat thriller. Looming beneath the shadows of his classics Citizen Kane and Touch of Evil, Welles’ The Trial is an underappreciated masterpiece of avant-garde cinema and surrealist art. Some call it hyper-stylized, over-the-top, nonsensical and entirely unwatchable. From the latter perspective, it is all these things, yes, outside of being unwatchable. But with The Trial, Welles has created an audacious film that demands to be remembered; something truly unlike any film that has come before or after it.
Read more »
Posted by Gregory Roy at 11:30 PM 1 comment:

Email ThisBlogThis!Share to TwitterShare to FacebookShare to Pinterest
Labels: The Trial, Why See This

Read more »
Posted by Gregory Roy at 4:29 PM No comments:

Email ThisBlogThis!Share to TwitterShare to FacebookShare to Pinterest
Labels: My Month of Movies

In an era obsessed with remakes, reboots and sequels, it comes as no surprise that 2015’s summer Blockbuster season has given us a fifth sequel. And once again, movie-goers ask themselves- is no. 5 worth seeing? In this case, yes.

Writer/director Christopher McQuarrie’s Mission Impossible film opts for a simple, tried and true plot line of many past action films. This is no slight towards McQuarrie’s writing abilities, who earned an original screenplay Oscar for the sleek crime thriller The Usual Suspects. Thankfully, he knows such twists and turns do not fit the Mission Impossible mold. Audiences have flocked to the MI series for impressively staged action sequences and the whacky virtuosity of Ethan Hunt (Tom Cruise).  Both are in full force here.

The finals moments of Mission Impossible: Ghost Protocol, have Hunt and the IMF (Impossible Mission Force) barely saving San Francisco from nuclear annihilation. In Rogue Nation, the director of the CIA (Alec Baldwin), opposed to the Hunt’s unconventional tactics and admittedly lucky breaks, shuts down the IMF and a search for Hunt begins, who is to be charged with treason. Out in the cold, Hunt is in the midst of his own pursuit— tracking down a terror network known as the Syndicate. Hunt has linked them to a series of global terrorist attacks. After an early face to face encounter with its leader, the composed yet cunning Solomon Lane (Sean Harris), Hunt will stop at nothing to find him and bring down the Syndicate.

Rogue Nation marks the third collaboration between McQuarrie and Cruise in recent years. Their first pairing came in 2012 for the rather flat, more Bourne-esque thriller Jack Reacher.  Last year’s under-watched sci-fi film Edge ofTomorrow earned the two greater praise. What worked in Edge of Tomorrow that was absent in Jack Reacher, is Tom Cruises’ underutilized charm and comedic timing.  Ethan Hunt is not Jason Bourne and at no point does he ever try and mimic James Bond. He gets into trouble and occasionally relies on a little luck to get himself out of a jam. Hunt’s formidable charisma never strays too far and this is why we like him.

Cruise is certainly not the only actor who deserves praise in Rogue Nation. Already mentioning Sean Harris’s brilliantly restrained evil; Simon Pegg, always a crowd pleaser, is as good as ever as Hunt’s genial, sarcastic wingman. Rogue Nation also wins many fans for the return of Ving Rhames as the calm and cool Luther Stickell who was noticeably absent from Ghost Protocol. New to the film is Rebecca Ferguson as Ilsa Faust who appears right at home as the double/triple/quadruple crossing “frenemy” of Hunt. The ensemble works like a charm.  No character, big or small, steps out of their role to try and overtake the Ethan Hunt show. Early in the movie, as Faust helps Hunt out of an early predicament, he has to ask her, “this is the first time we’ve met, right?”

Like its predecessor, Rogue Nation opts for a livelier, funnier tone, something pushed aside in the darker, more intense MI 2 and 3. That isn't to say the movie does not have its share of edge of your seat, final-seconds-before-it-goes-kaboom-type drama we crave in Mission Impossible—motorcycle chases through the tiny streets of Casablanca, Hunt hanging onto a flying plane’s hatch in Belarus, scuba diving underneath a powerplant- without oxygen…A particularly memorable scene finds Hunt trying to desist three assassins high above an ongoing performance of Turandot at the Vienna Opera House. Its an unusually long scene for an action film, but the intricate staging, cross cutting and rich opera soundtrack make this scene and the movie as a whole, a pure delight to watch.

Ghost Protocol saw a resurgence in the critical praise of the MI series, and Rogue Nation rightfully surpasses it. If such a trend continues, I wouldn’t mind seeing the 53 year old Cruise throw himself off buildings and onto planes (or vice versa) again in a few years, and if he still can maybe even into his 60s, though at that point, hopefully he’ll keep his shirt on.