The Food of the Gods is already an elite B-movie for two reasons:

1. It is an adaptation from an H.G. Wells story
2. It was nominated for an award that wasn’t a Razzie, more specifically the Academy of Science Fiction, Fantasy & Horror Films’s Best Horror Film of the Year award (rightfully beat out by The Omen)

If the movie 2012 reaffirms to us that our greatest apocalyptic fear is an array of giant, global warming induced mega-disasters, one can only assume the great apocalyptic fear of the 1970s would have come in the form of giant man-eating farm animals and monstrous, bloodthirsty mice.  Then again, you can’t believe everything you see in the movies.  We'll have to wait and see if 2012 and the Mayan prophecy hold true come December 21st.

In their original form, B-films came to life through low budgets, short schedules and flimsy morals. Every so often you’ll come across a director who wants to make a tacky horror movie about giant, bloodthirsty mice while trying to insert a social commentary about man’s disregard for the environment. I have a feeling the end result never pans out to the initial intentions.

Case in point with The Food of the Gods.

I can imagine that this comes with the difficulty of adapting an H.G. Wells story for the screen.  While the author's far-reaching, science fiction texts constantly typically held an underlying critique of human existence, this movie fails horribly at trying to present something similar depicting the battle of man versus giant mouse.  But show me someone who could succeed given the absurd premise.

The Food of the Gods begins immediately trying to implement this haughty social commentary about man's disregard for the natural world and his over abundance of its resources.  Our protagonist Morgan, the skinniest professional football player I’ve ever seen, recalls his uncle always telling him that nature will someday have its revenge on mankind.  I can tell you right now that Morgan’s uncle is probably crazy and I can also assume that Morgan let his story go in one ear and right out the other as we all would when someone tells us that nature will unwittingly curse us.

To relax before their next big game, Morgan and two of his teammates decide to take a trip to a small reclusive island which is reached by a short ferry ride.  Upon arriving on the island, one of the three players is viciously attacked by a swarm of giant killer bees and is consequently killed.  There are two problems with the reaction from the surviving members.  First off, Morgan simply shrugs his shoulders as if a). Being killed by a swarm of bees is normal and b). Seeing bees the size of a human head is also normal.  Secondly, and far worse, Morgan’s teammate tries to justify the strange occurrence by stating that their friend’s “luck just ran out.”  Really, your friend and teammate was stung to death by a swarm of enormous bees because his luck ran out? The cold and awkward heart of this scene can be to blame for its horrible acting but even more so, the blame should be put on the film's screenwriter  who clearly lives alone in a cave if he thinks that this is an acceptable reaction to witnessing someone’s tragic death.  Oh well. 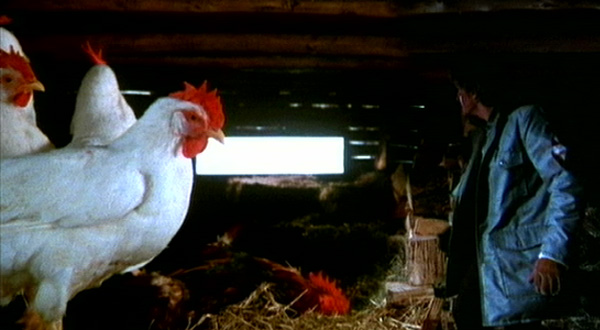 Morgan and his surviving mate finally decide to some logical action and look for help at which point they arrive at a farm on the island.  Behind the doors of this quaint little barn, there just so happens to be a giant rooster living inside that tries to kill Morgan.  Thankfully he survives with only a few minor cuts, conquering the beast with a pitchfork in an incredibly gripping scene. The farm owner, a lady who seems totally accepting of her giant rooster (now dead, also ok with that) explains to Morgan how the animals grew to such outrageous sizes: her husband stumbled upon a mysterious milky substance on their land, and for no clear reason decided to feed it to their farm animals and they grew.

But what that does not explain is the giant bees, dragonflies, worms and mice that the group also encounters.  There was no mentioning of this substance being feed to them.  Just the chickens.  Oh well, I can let that pass.

From here we dive into the focal point of the movie- the battle between man and mice- giant mice of course.  After a handful of other people straggle their way into this unfortunate situation, including a pregnant woman who gives birth in the midst of a mouse assault, it becomes Morgan’s task to fend off the mice and save the group.  Their primary defense against these killer rodents is many, many rounds of shotgun shells.  The movie must see this as its selling point as half of the movie just shows mice being blasted away by shotguns.  I must say, this was a terrific idea by our socially inept screenwriter and unlike most of what he wrote, these parts really turned out well on screen.

But the real diamond inside the rough of The Food of the Gods is the special effects or lack thereof.  I can imagine it must have been a daunting task to try and create giant mice back in the 1970s without the help of CGI or any of the technology modern movies like to overuse today. What they choose to do in spite of their situation was to create a bunch of model houses and cars and let normal sized mice play on them creating the perception that these mice actually are atrociously large.  It is almost convincing.  The models in these scenes are actually very well crafted and their effect would almost seem to work if each shot of them was not ten seconds long, more enough time for us to realize that the house is actually a model, the mice are not giant and also, that these mice are not trying to tear apart this house and kill everyone inside.  But I can only imagine the difficulty for someone recording twenty mice crawling around a model train set waiting for the exact moment when they look like they want to kill somebody.

In all honesty, the movie could have scrapped its opening nature revenge prophecy and just showed people shooting mice with shotguns as its depiction of man's battle against nature is more than enough philosophy for what its trying to show.  I did not even mention the particular character who sees the mysterious goo steroid as a lucrative business opportunity as well. (Obviously a social stance against man's developing sense of greed and capitalism.)  Honestly, we all need a prophecy about killer farm animals and greed just as much as we needed to see Jack and Jill. These giant mice could have shown up completely unexplained and I bet there would have been no complaints by any critic.  But at the same time isn't the point of B-movies to laugh at their pathetic attempts at narrative and structure?   I believe it is.  And when everything was said to be in its right place and the movie called complete, The Food of the Gods offered us yet another perilous struggle between man and nature.  Only this time there were no giant rain storms or earthquakes tearing away at the earth.  In the strange world within our screen, man's great enemy just so happened to be a colossal herd of steroid-abusing mice.  And we got to watch it all safely and confortably, from the outside looking in.  Yes that surely is the point of these great movies, so now I say leave it be!

A for effort, D for craft and A++ for entertainment!  In all of its terror, fear and absurdity, The Food of the Gods is without a doubt an early highlight of this new category.

Email ThisBlogThis!Share to TwitterShare to FacebookShare to Pinterest
Labels: 1970s, b-movies, bad movies, camp, cult, The Food of the Gods, The Killer B's, Why See This